So, after making the owl plush last week I was reminded of some of the requests I received for an Owl Bear. It’s sort of a classic monster created for the game Dungeons & Dragons, but versions of it exist in other fantasy games like World of Warcraft too (Wildkin/Moonkin). Seeing some of the official and fan-created art for this creature – some of which is really cute! – I couldn’t help but want to try and make a quick variation using the new owl pattern 😀

So this little bonus pattern of sorts has the same body shape as the original owl, but with new clawed and winged arms, feet, bear ears, tail, and detailed face. It’s just about the pudgiest bear cub you’ve ever laid eyes on, haha! I hope some of you nerdy D&D fans out there might give it a try! 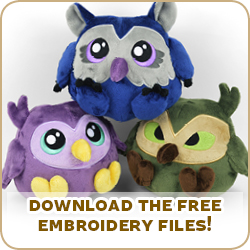 Hello! I'm Choly and I design kawaii sewing patterns ♥ Click here if you're new and want to learn more about the site!