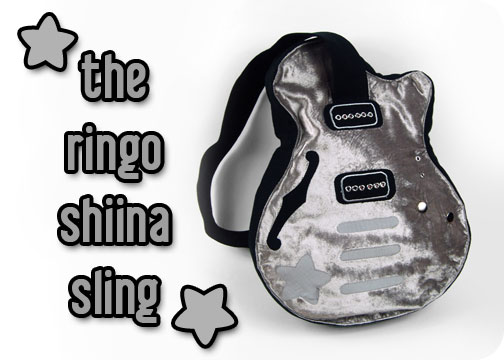 Do you like how crazy and edgy today’s pattern looks? 😀 This project is a tribute to my favorite musician of all time, Ringo Shiina. Ringo is a Japanese musician that’s been making music since about 1998, and her style ranges from punk, alternative, jazz, ska, funk, and even some hip hop. Her diversity is what I love so much about her. She even manages to fully integrate Eastern music styles with Western ones. It would not faze her one bit to use a shamisen for a rock song, or do a hard core punk version of a traditional Japanese ballad. She was also part of a group called Tokyo Jihen for many years, but during that time she mellowed out to just basic rock. Her solo stuff I always thought was infinitely better.

Ringo’s had countless guitars over her career, and they all look really awesome, but the one I had the fabric to make was her silver sparkle version of the Duesenberg Starplayer TV. Don’t get me wrong, if I had the fabric I would have made so many more of her guitars! I’ve seen other patterns for guitar bags online, but I really wanted to try my hand at making my own so I could make some personal adjustments. Firstly, the bag has some depth from an added gusset, it zips at the top, it has the guitar neck attached to the pickups as a strap, and of course it’s shaped like Ringo’s guitar! Even though it’s not sparkly, I had some leftover crushed velvet from a Christmas gift I made a few years back that I thought did a decent job of mimicking the finish of the silver guitar. I’ve added the star decal in the corner as it shows up in her Gunjou Biyori video and I thought it was an adorable touch 😀

END_OF_DOCUMENT_TOKEN_TO_BE_REPLACED

Hello! I'm Choly and I design kawaii sewing patterns ♥ Click here if you're new and want to learn more about the site!